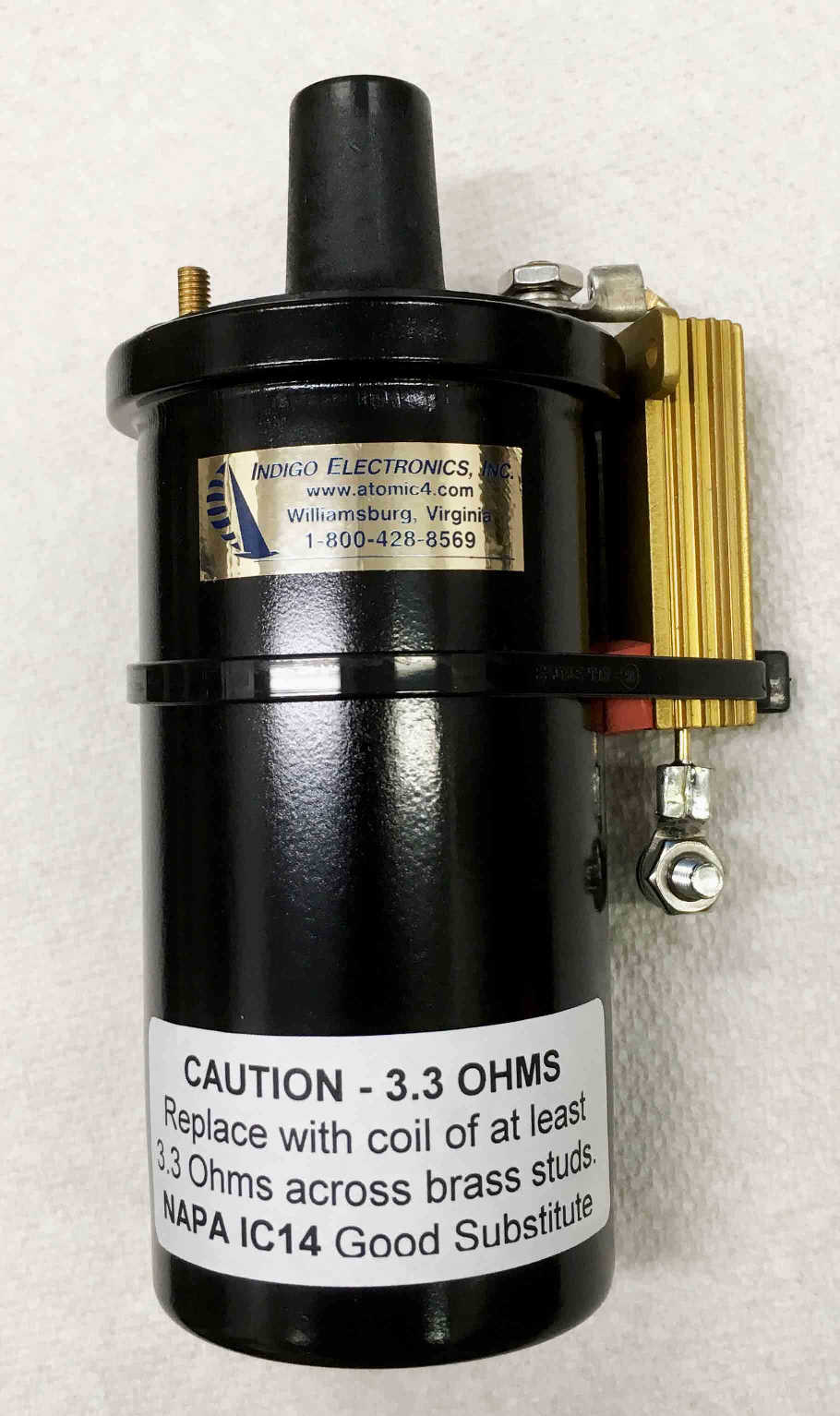 Just what is a Ballast Resistor and why is one needed? A Ballast Resistor is an extra electrical "load" which is installed in the electric circuit providing power to the ignition coil for the purpose of reducing the voltage that the coil receives. This may seem somewhat counter-intuitive as one would think that the higher the voltage to the coil, the better the spark to the plugs and the better the engine will run. That is true up to a certain point. After that point, the extra voltage simply causes the coil to run at a higher temperature than it needs to. For years, the Indigo Electronic Ignition Kit has been offered and installed without a Ballast Resistor with essentially no feedback that there was any issue with the coil running hot. It has been known that the coil can be found to operate near 200 F but that was to be expected and has not presented any problem. However, a very lively and informative discussion was held on the Moyer Marine Forum in 2011 regarding coil heating, failures and possible solutions. At that time it came to light that a few A4 owners, at least those who participate in the Forum, had indeed experienced multiple coil failures. The concensus was that the coils were operating at too high a temperature and that was leading to premature failure. It was also realized that there are a number of variables that can have a significant affect on coil temperature, including the coil internal resistance, alternator output voltage, type of alternator regulator, A4 operating speed, A4 operating temperature and engine compartment temperature, and A4 duty cycle (long periods of operation versus short periods).

We took this concern to heart and decided it was time to conduct our own testing. Three different Ballast Resistors (1.0, 1.5, and 2.0 Ohms) were tried initially. Picking the proper resistor is not as straightforward as one might think. While the coil has a certain internal resistance (as measured across the two brass studs on it), a coil does not behave in the same manner as does a plain resistor when installed in an electrical circuit. Inductance and capacitance come into play such that the current flowing through the coil is less that the value obtained by simply dividing the Voltage across the coil by the coil resistance (I=V/R). As testing progressed, it was quickly realized that the 1.0 Ohm version would be the optimum choice for several reasons. First, the 1.0 Ohm resistor provides about a 1.7 Volt drop. This will give a range at the coil of from about 10.3-12.3 Volts with the system Voltage being 12-14 Volts. That range insures that you have sufficient spark to keep the engine running yet protects against high system Voltage. Second, the 1.0 Ohm Resistor reduces the Wattage (and thus the heating and operating temperature)in the coil about 22%. The type of Ballast Resistor chosen provides reasonable cooling surfaces and a minimal full load rating of 50W. However, the resistor selected has to be de-rated from the 50 Watt rating as no additional heat sink is installed and also for an ambient temperature of 150F (typical engine compartment). Nevertheless, the resistor is still rated for continuous operation at 6 Watts which is just about two times the worst case operating condition for the A4 (See Table Below).

Quite often, engines equipped with an Electric Fuel Pump will utilize the "extra stud" mentioned above on the late model starter solenoid to energize the electric fuel when the starter motor is cranking the engine. If your pump is wired up this way, you CANNOT simply land the new Purple jumper wire for the Ballast Resistor on this same stud without further action. If you do, once the engine is running, the Electric Fuel Pump will "back feed" the coil thus rendering the Ballast Resistor useless. Until now, the only option available was to land either the Purple wire or the Fuel Pump wire but not both. We now offer a solution to this issue ... a simple diode. Diodes are functionally the same as a check valve in a hydraulic system, allowing flow in only one direction. By selecting the proper Diode, packaging it properly, and then installing it in the correct orientation, one can land both the Electric Fuel Pump and the Purple wires on the "extra stud". The Diode as installed prevents any flow of current from the Electric Fuel Pump back to the solenoid stud. Below is a picture of the kit that we now offer. 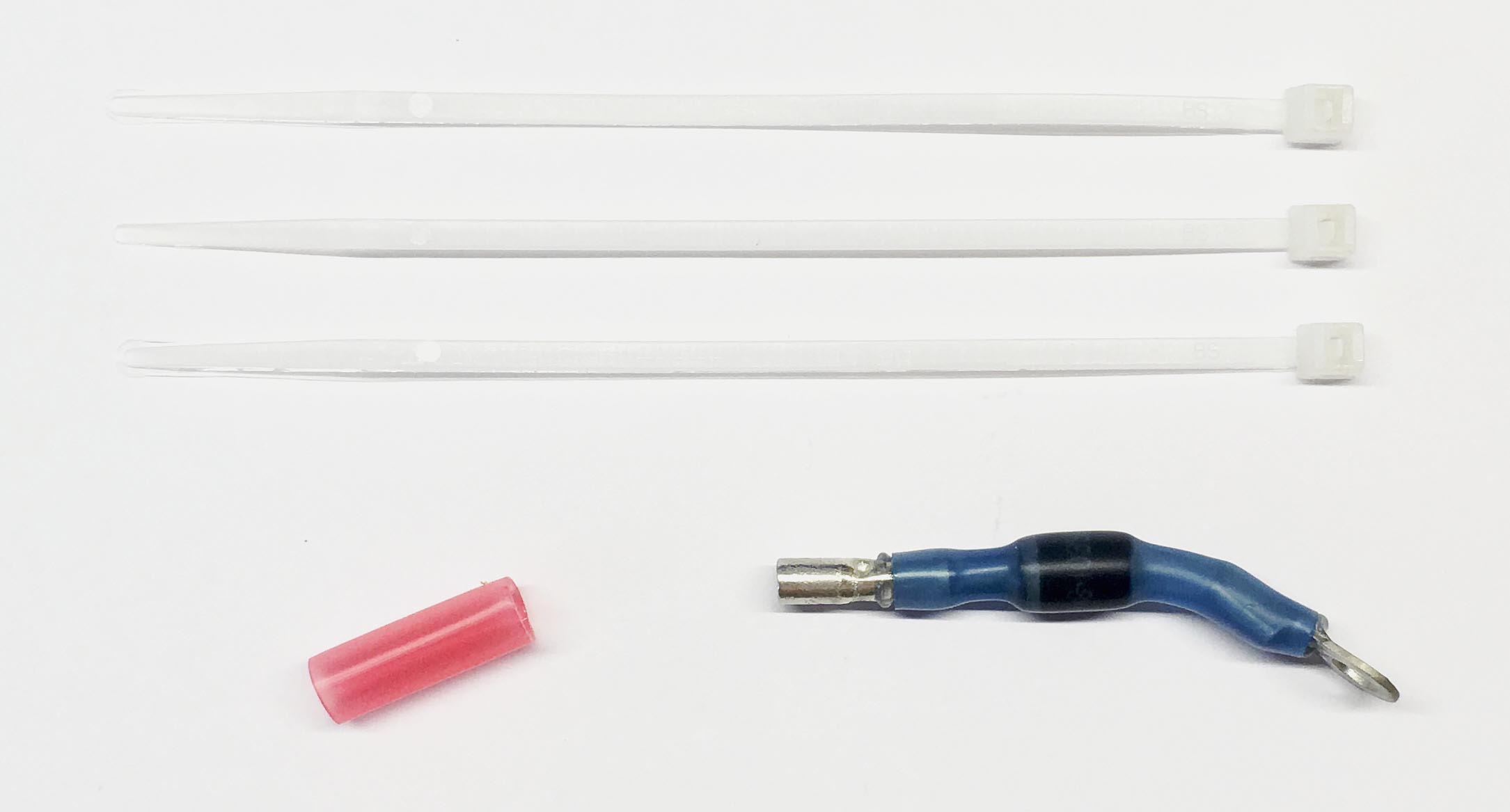 Installation of the diode is very straight forward. After first removing the Electric Fuel Pump lead from the solenoid stud, the existing terminal on the end is removed, the wire stripped back, the insulating sleeve put on the wire, and the wire crimped into the butt connector on the Diode assembly. The insulating sleeve is then shrunk in place and the ring terminal end landed on the solenoid stud along with the ignition Purple lead.

Indigo Ignition System Performance - With and W/O a Ballast Resistor

Test data was obtained utilizing a bench mounted system which is routinely used to verify Electronic Ignition Kit components prior to packaging and shipping. The shutter is rotated at a constant speed of 360 RPM which is equal to an engine idle speed of 720 RPM. The slower the engine runs, the greater the heating of the coil so this shutter speed represents a worst case condition. Voltage applied to this system is maintained with a 12 VDC battery and a Smart Charger. A voltage of 13.5 VDC was chosen to simulate an alternator which charges at a voltage level appropriate for proper charging. Voltage and Amperage were both measured with a Fluke Digital Volt-Ohmeter and temperatures measured with a non contact Infrared Laser Thermometer and verified with a contact probe used with the Fluke meter.

A Complete Retrofit Package including:

Diode Kit is available for $10 additional